Originally formed in 2008 by vocalist Troy as a King Diamond tribute band, performing for three and a half years with over 20 shows including performances with Mike Wead and Hal Patino from King Diamond. After returning from several other projects, Troy started to create a concept idea in 2014 and moulded a story, band, album and show around it.

Consisting of a 6-piece quartet – Troy Norr on vocals showcases those comparable chords to that of the mighty King Diamondand shows the influence of obvious band immediately; this would appeal the interest of THEM, I would imagine. Marcus Ullrich (Lanfear) on guitars shreds away with complex rhythms of progressive motives and powerful melodic riffery, enticing for an enjoyably fulfilling listen; similarly found with second guitarist Markus Johansson. The prolific sound production varies with great dexterity from pummeling powerhouse Mike Lepond (Symphony X) on bass, and Angel Cotte (Demolition Hammer)on drums. Richard Seibal on keys, equally performs with prominence to the melodic structure with stellar gracefulness.

Check this band out! Expect a theater act with lots of surprises, high musicianship and several actors on stage! And no; its not only King Diamond worship….also expect faster stuff in the vein of Nevermore and even Nasty Savage!! Their show in 2017 was one of the best for Little Devil according most of the visitors! This band is gonna be great!! THEM  released their follow up entitled “Manor of the Se7en Gables” in October 2018 and it too received excellent reviews!! This album is even more thrashier than his predecessor!  This is the 3rd and most likely last time to witness this band at a small club like Little Devil!

The Difference is a Belgian quintet formed in 1996 when members of Nasty Society and Blackmail decided to start a new band. With the first line up ,Steven Van Hyfte on lead guitar, Christophe De Bock on rhythm guitar , Dirk De Kesel on bass , Kristof Ingels on drums and Gerd Hanssens on vocals, three demos were recorded. At that time the band had a rather doomy sound inspired by bands as Anathema and Paradise Lost. The Demo recordings resulted in quite some performances. The band had a strong live reputation which made them well known in the local scene. Around 2002 bassplayer Dirk and drummer Kristof left the band for personal reasons. They were replaced by Steven Mervielde on bass and Edward Timmerman on drums. With this line up the first full album “ Lost in Mass Confusion” was recorded. A few months later Christophe De Bock left the band, he was replaced by Bram Van De Moortel. In 2009 the second album “ When Light uncovers Grey” was released. After a few months Edward (drums) also decided to stop playing. He was replaced for a short time by drummer A.J.
During this period the music video “ The Awakening “ was recorded and released. The cooperation with the new drummer didn’t work out so drummer A.J. was asked to leave the band. As a result of the new album and the music video the band played some bigger festivals like Alcatraz festival ( with Saxon , Testament…) and played as support for Agent Steel and Vicious Rumours In 2012 The Difference performed at Graspop Metal Meeting. Meanwhile Kristof Ingels rejoined the band as drummer. Autumn 2012 Bram decided to leave the band to go study and work in China. He was replaced by Ruben Dhaene almost immediately. Ruben seems to find his way in the band very well, a fresh breeze can be a good thing and so it is. Previous years, The Difference released an acoustic EP with a 5-song collection of its work in acoustic form. At the moment The Difference is working on songs for a new full album, together with the filming and release of its new music video! Stay tuned!

THEM (USA/Germany)
THE DIFFERENCE (Belgium) 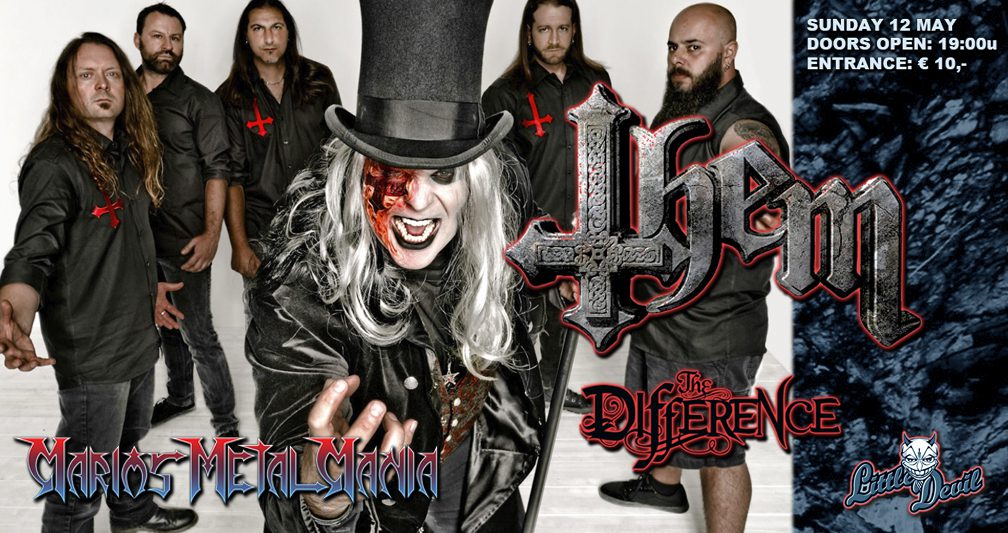 Dance With The Devil XL: Wonders in Devilland
Scroll to top