THRASH ATTACK is a metal cover band from the south of The Netherlands. The band was initiated in 2022 by Spike Meulders and Marcel Coenen, both well known from Stormrider and from The Art Of Pantera. The band comes out of the ashes from the band Metal Attack which disbanded in December 2021.

GUITARIST Marcel Coenen is well known for his collaboration with Channel Zero and with projects like Ayreon and Christmas Metal Symphon where he played together with some big names in the industry like Chuck Billy, Joey Belladonna and James La Brie. He also made a name with his prog metal bands SUN CAGED and LEMUR VOICE and his solo career where he recorded 4 albums and a live DVD.

2ND GUITARIST David Maes is a guitar student from Marcel and is very good shredder, perfect to play next to Marcel the leads and double leads.

DRUMMER Spike Meulders is well known from the band THE ART OF PANTERA and for his work with the 90’s bands FORM and SPEEDICA and by his very tight playing. 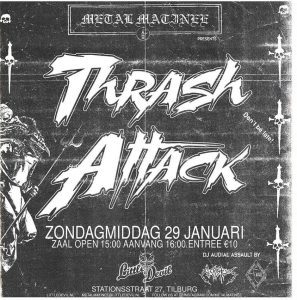