Downfall of Gaia is a dark wall, moving forward relentlessly, enveloping the listener, absorbing one’s spirit to take one into the realm of the band’s potent sound.Founded in 2008 and having undergone several line up changes, the quartet is now comprised of the two founding members Dominik Goncalves dos Reis (guitar and vocals) and Anton Lisovoj (bass and vocals), Marco Mazzola (Guitar) and Michael Kadnar (drums), who are respectively located in Berlin, Hamburg, and New York City.Although the group’s roots lie within the DIY / Crust scene, they have become more closely associated with a sound that rather corresponds to the impact of an avalanche made from black earth, rock, and dirty sludge, while their lyrics poetically describe the dark side of living. In their early days, they released one demo, which was heavily influenced by d-beat, in addition to a split tape with French band Kazan in advance to a tour EP in 2009. Their debut album “Epos” followed in 2010, which was realized with the help of several DIY-labels.The band’s connection to the DIY scenes also led to a split LP with In The Hearts Of Emperors on Alerta Antifascista Records, one of the most important underground/punk labels in Germany, as well as Moment Of Collapse and Shove Records.The band never intended to stagnate, and naturally their sound underwent significant changes. Downfall of Gaia drifted away from fast crust punk, which influenced their early work, towards longer and more intense material that became the more massive with black metal, doom and sludge elements.In 2012, this new sound was heard on their second album, their first for legendary label Metal Blade Records, titled “Suffocating In The Swarm Of Cranes,” which more than satisfied what fans of infinite heaviness longed for, and made its appearance in annual end-of-the-year and best-of lists among critics and editors.When Downfall of Gaia were not rehearsing or recording, they love to go on tour ever, which is something they’ve done since their humble beginnings: often and anywhere. They have travelled through almost every European country and played in most US states in 2011, as well as in 2013.In 2012, they even went to Russia, enthusing fans in Moscow. In 2013 alone, the group performed more than 100 concerts. In 2014, they gigged with Neurosis, Toxic Holocaust, Black Tusk and many more and also appeared at cult open air Hellfest in France.Now in the same year, their excessive touring came to a halt to make time for their second release via Metal Blade. The band entered ’79 Sound Studio in Cologne and started working on new material. The results were mixed at renowned Atomic Garden Studio in the San Francisco Bay Area and mastered in Portland, Oregon, at notorious Audiosiege Studio. Finally, the new masterpiece was completed and is ready to ravage eager listeners. Once again, the band has developed a concept. The album addresses mankind’s most powerful enemy: time, which passes without mercy.Downfall of Gaia refrain from any calm moments, let alone pauses, and go full throttle immediately on “Aeon Unveils The Thrones Of Decay,” released via Metal Blade Records in November of 2014 followed by extended touring worldwide all over Europe, North America, Japan and Australia. “Aeon Unveils The Thrones Of Decay” is being reviewed and well-discussed in major print- and webzines all over the world and one more time made its appearance in annual end-of-the-year and best-of lists.Despite an intense band life and a successful touring history, guitarist Peter Wolff called it quits in early 2016 to focus on new projects, family and his private life. Downfall of Gaia was on the hunt for a new member and after a few auditions a choice was made. Marco Mazzola became the new face behind the guitar and replaced Peter Wolff in April 2016! Right now Downfall of Gaia is preparing for their new record ‘Atrophy‘ which will be released worldwide via Metal Blade Records in November of 2016! Recorded in June 2016 at Hidden Planet Studio Berlin. Mixed and mastered at Atomic Garden Studio, San Francisco. A record about the the absurdity of life and of human existence, an album about the constant dialog between life and death.“What is called a reason for living is also an excellent reason for dying.” – Albert Camus 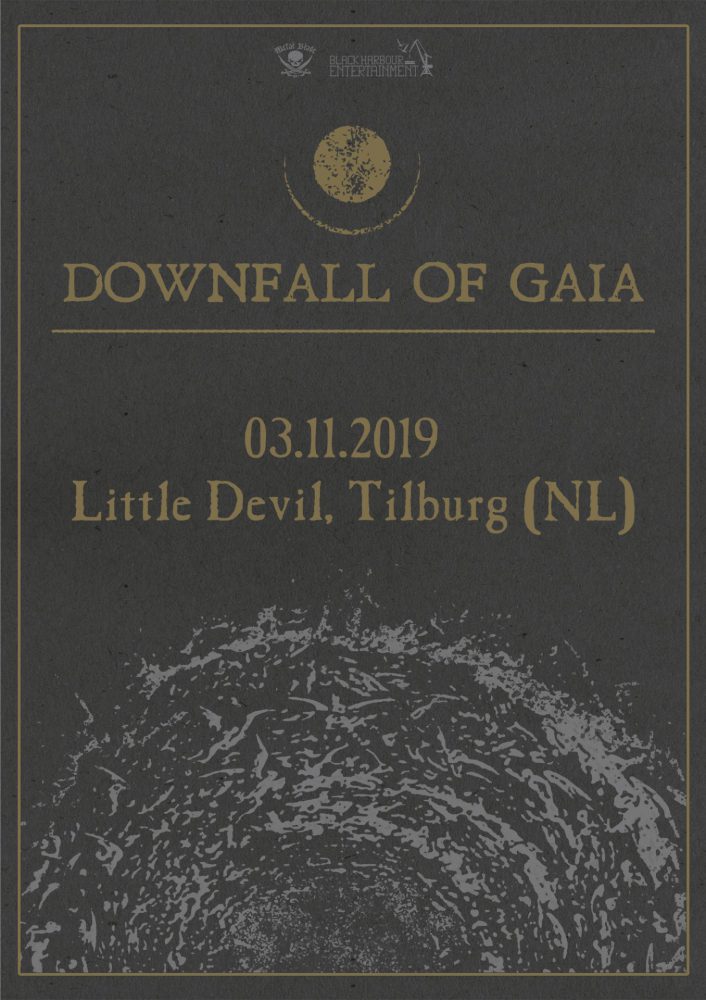