Skull Fist is a Canadian heavy metal band that began their quest for world domination and forever riding the beast in 2006. The band was formed in Toronto, Ontario, Canada. After releasing their first EP “Heavier Than Metal” including drummer Alison Thunderland, guitarist Sir Shred and bassist Casey Slade they signed up with with NoiseArt Records. They toured across Canada in support of it.

Their quest continued along with a short tour in 2011 opening for fellow heavy metallers Enforcer and Bullet. After the tour they began recording their debut album “Head Öf The Pack“. Sadly enough, during the recordings drummer Alison and guitarist Shred left the band due to personal conflicts. Jackie and Casey continued writing the album together. Eventually, their debut album “Head Öf The Pack” was released on august 26th, 2011. Jonny and Jake were recruited as drummer and guitarist and The Fist was back on full power. They toured Canada supporting their album. Overseas in Europe, they opened up for Sabaton, PowerWolf and Grave Digger and continued supporting their album. They ended up in playing on several European festivals. In the beginning of 2012, they did another European tour featuring Grand Magus, Bullet, Steel Wing and Vanderbuyst and kept on touring ever since. January 10th, 2014 they released their second full album ”Chasing the Dream” with NoiseArt records. After the release of their second album, these fools of the road have toured Europe, UK, Japan, South America, Mexico, and Canada many times over and now are touring across USA, January 2015. Skull Fist, the band of moderately psychotic brothers, have spent the last 3 years in buses, vans, cars, planes, trains and automobiles touring their brains out in the name of freedom. They have gone from basements to bars, bars to clubs, and clubs to concert halls solely because they just can’t stop and won’t stop rocking. Now they are touring again for the promotion of their latest album “Way of the Road”. Glad to finally book them in Little Devil; the only Dutch show during this tour!!! Check them out!!!

Riding high on the success of their own independent label, Record Breaking Records, Striker is the fastest growing metal band out of Canada. Their Juno Nominated fifth album, eponymously titled Striker, is a lethal force cut from the former glory of all things heavy metal. Striker is out for blood with this album, with high profile tours across the globe with Sonata Arctica, Dark Tranquillity, Primal Fear, and more, a host of new partners, and a growing fan base; there are no brakes on this train. Listeners are locked in to Striker’s growing circle pit of melodies that are more catchy than the plague, musicianship more mind blowing than a .50 calibre bullet between the eyes, and live performances with so much energy you could power an aircraft carrier. Full speed or no speed is the motto to live by, and going absolutely over the top is the only thing Striker knows. The band is now touring to promote their new album “Play to Win”. This is the 6th time STRIKER plays Little Devil (and the 5th time MMM books them). Always in for some high energy speedmetal? Check them out again!!

STRIKER (CAN)
SKULL FIST (CAN) 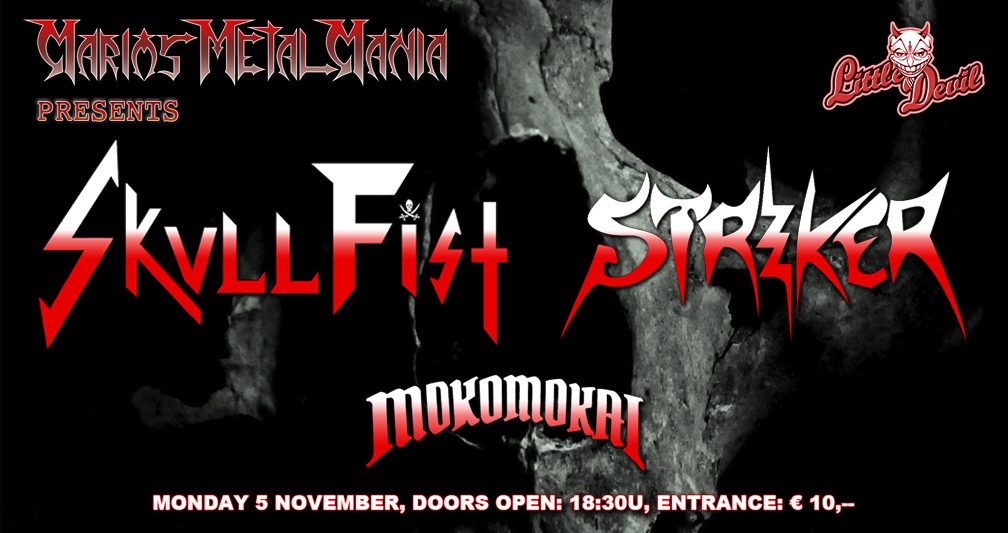