Formed in Wiltshire during the first glorious throes of the New Wave Of British Heavy Metal at the turn of the 1980s, Tokyo Blade were initially known as Killer. After a five-track demo tape had generated a fair degree of cult status under that guise, Killer became aware of some rival Continental acts using the name.

Having recruited singer Alan Marsh from a band called Genghis Khan, guitarists Andy Boulton and Ray Dismore, bassist Andy Robbins and drummer Steve Pierce decided to adopt the name as their own. This resulted in ‘Double Dealin’’, an independent four-track, twin-disc single. With a generous wind in the group’s metaphorical sails, the last thing they needed was another change of moniker, but that’s exactly what happened next.

Not too long after Ray Dismore was replaced by ex-Deep Machine/Paul Di’Anno’s Lone Wolf guitarist John Wiggins, Genghis Khan evolved into Tokyo Blade. Their first step was to withdraw ‘Double Dealin’’ and re-release it as Tokyo Blade, though in a less unwieldy state. ‘If Heaven Is Hell’ was issued first (b/w ‘Highway Passion’), followed by ‘Midnight Rendezvous’ (with ‘Mean Streak’ as its flip). Although these tracks did not accurately represent the band’s style – each would be re-recorded when reproduced on Tokyo Blade’s debut album – the singles brought the group valuable attention which, twinned with regular live work, brought them to the attention of the record company “Powerstation”. Having inked a contract with fledgling York-based independent label (whose roster eventually included Little Angels, Chrome Molly, Maineeaxe and more), Tokyo Blade recorded an album with co-producers Kevin Nixon and Andy Allen. Regarded by connoisseurs of the era as one of the most rewarding debut LPs of the NWOBHM’s latter stages, it was unveiled at the end of 1983 as Powerstation’s first full-length release.  Bernard Doe of the UK’s Metal Forces was quick to pour praise upon ‘Tokyo Blade’, hailing it as “the best British heavy metal release of the year” in a glowing nine out of ten review. In February 1984, Tokyo Blade appeared at the Aardschok Festival in Zwolle, Holland, which saw Metallica famously opening for Venom.  Tokyo Blade were again on foreign soil two months later as the group headlined the Earthquake Festival at Kaakshuvel in Holland (on a bill completed by Satan, Sortilege, Warlock, Bodine, Vengeance and Crossfire).  Shortly after they released the classic “night of the blade” album and began their tour of Europe supporting Mama’s boys” The tour was such a success that Blade were out agin in Europe only a few weeks later on their own headline tour filling 2 and 3000 seat venues every night. This success was followed by a US tour and a fantastic show at the French breaking sound festival with metal giants Ozzy, Dio and Accept. Tokyo Blade stole the day and the French fans went crazy giving Tokyo Blade a rapturous welcome to the stage and by the end of Blades set 13,000 fans were screaming for encores.Tokyo Blade returned to the studio to cut their third album release titled “Black hearts and Jaded spades” swiftly followed by a double headline tour of Europe with Blue oyster cult. However Poor management and poor record company support following the tour took their toll and Tokyo Blade disbanded shortly after. Founder and guitarist Andy Boulton kept going and released 2 more albums before being forced to quit due again to lack of company support. But Tokyo Blade have certainly been blessed with staying power. Fast forward more than a quarter-century and, after reuniting in 2008, four-fifths of the ‘classic-era’ line-up – Boulton, Wiggins, Wrighton and Pierce – plus singer Nicolaj Ruhnow have completed a brand new studio album “Thousand men Strong” on the fastball sony label for release on the 18th March. Produced by the legendary Grammy award nominated Chris Tsangarides.

In 2018 Blade are back with a brand new album “Unbroken” featuring 11 tracks performed by the original MKII line-up from the iconic “Night of the Blade” album era featuring Alan Marsh, Andy Boulton, Andy Wrighton, John Wiggins and Steve Pierce. Signed to 3MS music the bands’ 8th studio album is now available on Vinyl, CD and digital download. In true Blade style, it’s hard-hitting metal with strong melodic overtones and although it’s been a long time coming the boys are sure that the fans won’t be disappointed. The 3rd time MMM brings this legendary band to Little Devil and the first 2 shows where crowded so be on time to buy your tickets!

Rosie was founded in the late seventies, by Arjen Thielsch. The five guarantee pure rock that has made a decent name in the audience. Rosie for example: Westerpop, Lentepop and Vlietpop.  Rosie has been compared with AC/DC in the past. Although Rosie is not a coverband, AC/DC is a great source of inspiration for their sound and songs. So if you like AC/DC come and have a look!!! On stage, Rosie always gives the full 100% !!! With a spectacular show, a set full of energy and an ancient rock sound that you can not ignore!!! 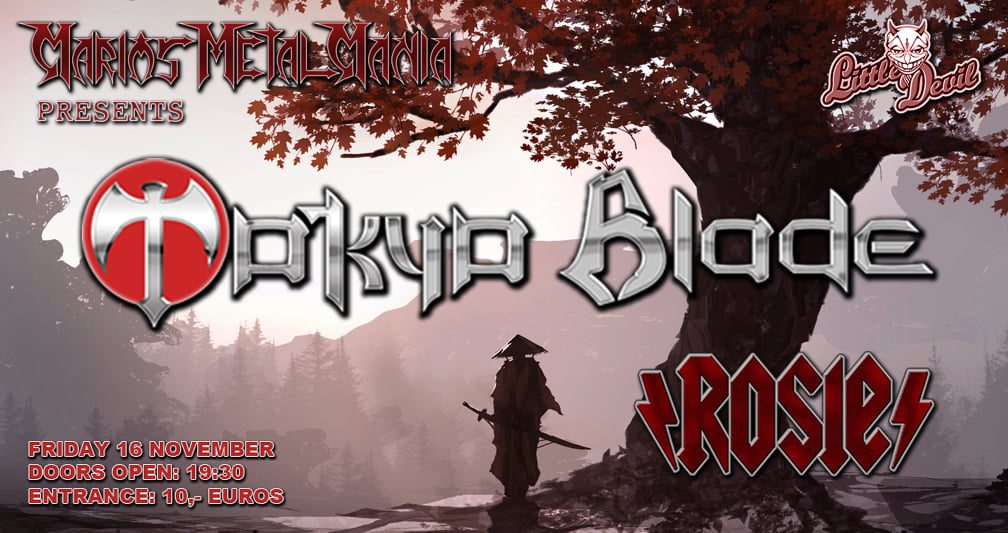