Dutch extreme thrash metal band INQUISITOR recently recorded a new album, which has been released in January 2018 and bares the title “Stigmata Me, I’m in Misery”. This new album marks the true return of INQUISITOR. Before the release of the new album, a teaser has been released as a digital single with the title “I am Sick, I must die”, which received critical acclaim and also includes two cover tunes, “Extreme Unction” (originally by PESTILENCE) and “Perish In Flames” (originally by DARK ANGEL). A vinyl version of this EP has recently been released. INQUISITOR stuck to their guns and hardly changed anything to their furious, unorthodox over the top style of extreme thrash metal but managed to expand it a little bit with interesting ideas, but without compromising the music. Although INQUISITOR is the sum of its four talented equals, the defining element of INQUISITOR however are the unique and outstanding vocals of Alex Wesdijk whose voice has lost nothing of its sickness.
INQUISITOR has been around for a little while again since the unthinkable happened in October 2014, when after almost two decades, INQUISITOR, resurrected in its original line-up. This unexpected rebirth happened only about one month prior to the re-release of INQUISITOR’S infamous debut album “Walpurgis – Sabbath of Lust”, which has been done by Hammerheart Records in collaboration with members of INQUISITOR. The original album, and the demo’s of the original line-up, have especially been remastered by JB v/d Wal (ex-Aborted, Herder, Dool) for this re-release, which is available on a 2CD format and on two separate LP’s. The original album, which was released on CD only in 1996, has long been out of print, and eventually has become a collector’s item for those who are searching for an obscure release like “Walpurgis – Sabbath of Lust”. What INQUISITOR sonically produced was fast, intense, extreme, uncompromising metal and on top of it, were the sick and at the same time unique vocals of Alex Wesdijk, which in the end defined their own outstanding sound. The notoriously blasphemous artworks and some of the not-so-christian-friendly lyrics were a reaction to their existence in a part of the so-called Dutch bible belt. The original line-up of INQUISITOR emerged in December 1991 from a Dutch area called The Veluwe. Their aim was to create an extreme form of thrash metal combined with dark and blasphemous lyrics. The result can be heard on their first demo “Blasphemous Accusations” which was released in 1992, and on their second demo “Your Pain Will Be Exquisite”, which was unleashed upon mankind in 1993. To gain a following, several gigs were done in The Netherlands, but also in Belgium and Germany. In 1995, INQUISITOR and bass-player/founding member Alex Bakker unfortunately went their separate ways. He was replaced by Hans Pos with whom the bass-duties were done on the album “Walpurgis – Sabbath of Lust”, which was recorded in the RS29 Studio with Oscar Holleman in 1995, and was released by Shiver Records in 1996. With the new line-up, their self-proclaimed style of Pure God-Damned metal was promoted through gigs in The Netherlands and also in Germany. However, shortly after the release of “Walpurgis – Sabbath of Lust”, INQUISITOR slowly fall apart. In October 1996, vocalist Alex Wesdijk was no longer a member of INQUISITOR, and two months later in December, guitarist Erik Sprooten left, and joined ANCIENT RITES permanently. Drummer Wim van der Valk moved on with new members, but the sound changed dramatically that eventually a new band emerged out of this, which became known as CENTURIAN. In 2002 Wim van der Valk pulled the plug out of CENTURIAN, and hardly bashed the skins of his drumkit for about 12 years until the unexpected reincarnation of INQUISITOR in 2014. INQUISITOR has come full circle now, and is back with a vengeance!

This Deventer (NL) based metal band was founded in 2009. They played gigs with such bands as Martyr, Disquiet, Malevolent Creation, Izegrim, The Lucifer Princi…ple, Erebus, The Monolith Deathcult and many others. In the summer of 2012 they opened for Sacred Reich at Hedon in Zwolle. Their performances are known for being an energetic, loud and interactive experience. In 2011 they recorded and independently released a 3-track demo. This demo was well received by the public and received positive reviews from several magazines and e-zines like Lords of Metal, Wings of Death, Aardschok and Zware Metalen.
In 2012 Grim Ordeal recorded and independently released “A Tragedy Unfolds”. The album was recorded with the help of JB van der Wal (Dool/Herder) There’s a video for the track “My Tragedy Unfolds” on our Youtube channel. Their new album with Into the Limelight Records is called “Embrace the Darkness”. Again the album was mixed and mastered by JB van der Wal 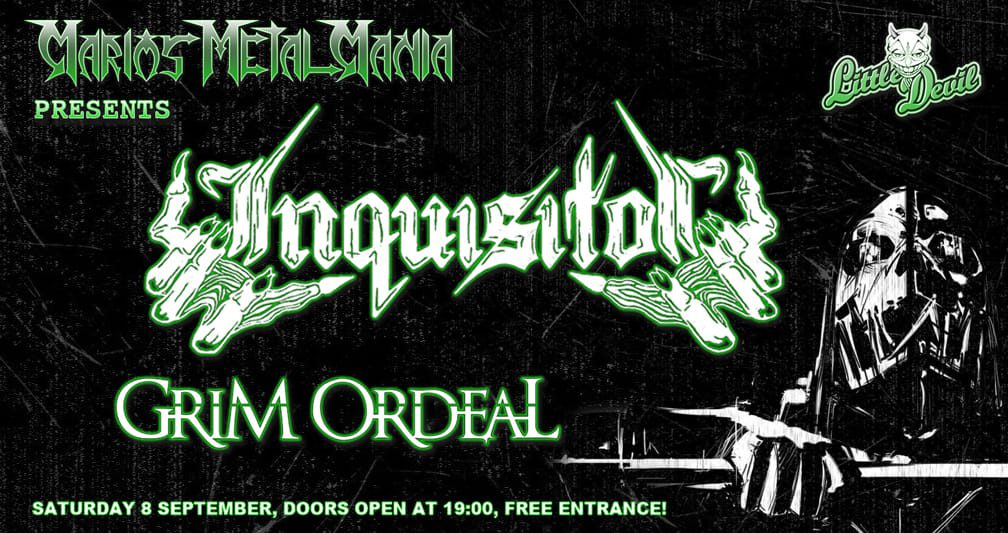